from Sound in the Living Current by Erothyme 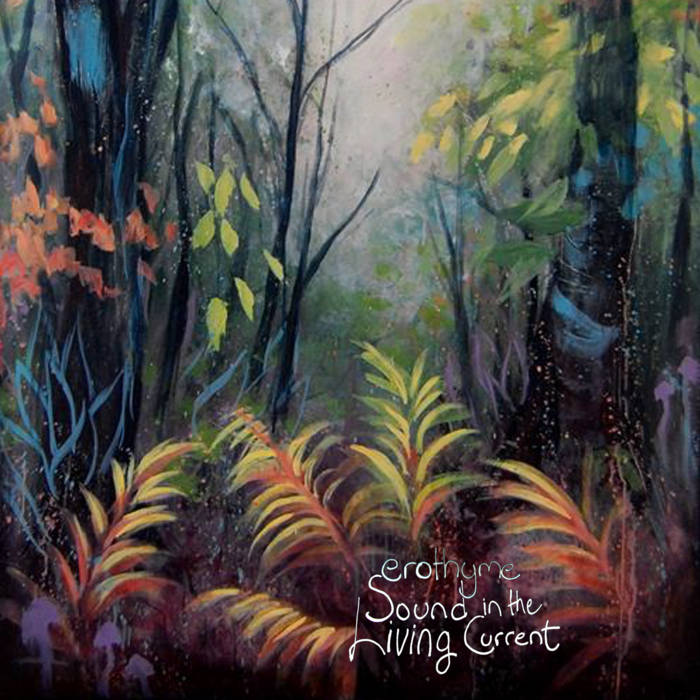 Wildflower was started on a train ride in October 2013. I was on my way to a show in New Mexico, watching the landscape roll by, and felt that the appropriate way to pass the time was to pull out the laptop and begin composing. This was one of the songs which began at the beginning - the intro was the first part to be composed. It isn't always this way. Initially it was in a very raw form, simple monophonic synthesizer sounds (sawtooths with lo pass fitlers) layered in harmony. The soft speckles of color in the hills and mesas outside my window coupled with my sense of aloneness offered the initial breath of inspiration for this sad but sweet tune. Just as these introductory harmonies came to their crescendo, and the lead melody had been written, I felt I could go no further with the piece for the moment.

It was while hanging out in Santa Fe in the time leading up to that show, sculpting the initial version of the beat out of a combination of digital blips and forest sounds I recorded with Kyrstyn Pixton and her microphone earlier that year during the making of our collaborations on Circadia, that I decided I absolutely needed my own field recording microphone, and the freedom to record and use whatever sounds I could find. So I promptly ordered the most affordable appropriate mic I could find, a Tascam DR-05, which is still serving me well, and soon I was gathering my first independent field recordings.

Early in its creation, the song quickly took on, to me, the significance of the art of finding copious amounts of beauty in the seemingly miniscule. Most of the sounds were either recorded from nature or derived from tiny pieces of recordings for other songs of mine. The title emerged as a reference to the famous William Blake verse:

Beyond the literary reference, the title meant a few things to me. It carried the thoughts of how much I value the natural beauty of a wildflower over the gaudiness of an ornamental rose, it carried a hint of a reference to ganja, one of the wildest flowers there is, and I could envision the structure of the whole song as something which gently grows into being and explodes into unspeakable beauty before quietly withering away, just like a wildflower.

The percussion for this track developed out of sounds I recorded all over the country, mostly made from rocks and sticks. New tones for the melodic aspects of the song were developed by using tiny snippets of audio from acoustic recordings and treating them as waveforms, transposing them accordingly.

The plucky stringed instrument sounds started as a combination of re-pitched and re-arranged guitar, harp, and musicbox recordings. Then, in spring of 2014, I had a recording session with Michael Svenson and his guzheng, an ancient Chinese stringed instrument. We went into the session with no idea which songs we were recording for, and ended up deciding on two of them, both of which are now on this record. The other one was the track now called Lead Us to the Sound, which was then much simpler and called simply "Sandstone" - it didn't escape me that these two songs fit nicely into relevance with that William Blake poem, with the wildflower and the grain of sand.

The strange rhythmic buzzy digital sound that plays the lead melody twice (during the intro, and then during the climax) was made from taking notes out of the guzheng recording, twisting them into strange digital tones with destroyfx's Buffer Override, one of my favorite free VSTs, finding buffer speeds which were -almost- in key with the song, and then saving that audio, tuning those tones into the key of the song, and rhythmically re-sequencing them. This process offsets the original harmonics of the sound to be slightly out of key, but the buzzing of the interrupted buffer becomes by far the most prominent tone in the mix, and the subtle now-detuned harmonics become simply a small part of the rich texture and impart a unique slight tonal beating to each and every note.

I personally recorded a bit of piano and clarinet for the last third of the song. The piano blends in by matching some of the stringed instrument melodies, and the clarinet layers weave thru the mix with a bit of filtering. There probably isn't much more to say about all that.

The tone of the intro was enriched from its original raw synthetic form in two ways. First, I took some speakers into the woods and played the intro nice and loud at the bottom of a hill while I recorded it with my field recording mic from higher ground, which created a nice organic forest reverb (and a bit of insect sounds, which I tamed a little with an EQ). Second, I made a version of the intro which played four times as fast, and timestretched it back to its original speed with Paul's Extreme Sound Stretch aka paulstretch, which gave the output a ghostly, blurry, slightly degraded texture, like an old faded photograph, or like looking through a dusty window.

The song ends with the original low and deep synth chords, a few plucks of Michael's guzheng, and the sound of footsteps crunching through leaves on the forest floor.

I actually did include the sound of a single wildflower being picked in this song. I won't tell you where.