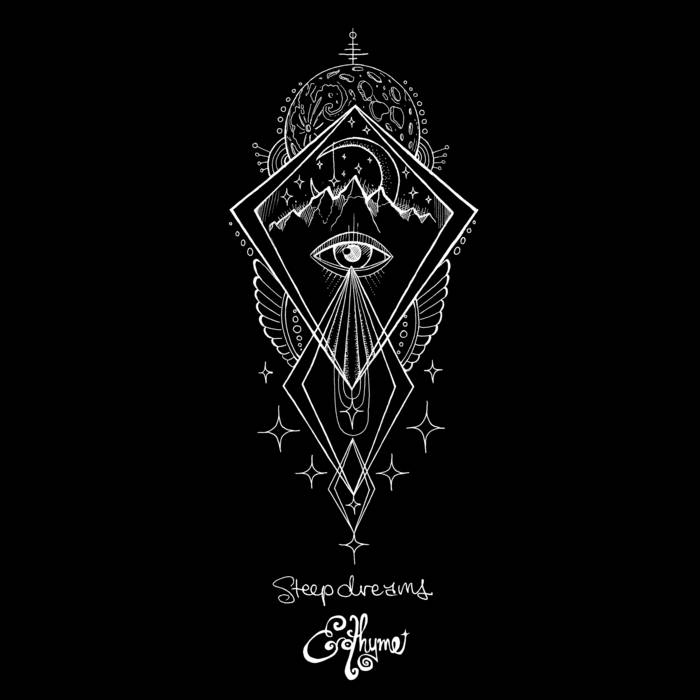 fernwehio One of the most transcendental, redefining pieces of music I have ever witnessed Favorite track: Soo Maany Staars (Redshifted).

Megan Chester Another stellar collection of the most simultaneously beautiful and glitchy ear worms! I long for the time when we can be together again, dancing to Erothyme live. Favorite track: Inspiral (feat. Jessica Sirena).

Against all odds, you have made it to 2020AD, or perhaps even beyond. You reside within remarkable times.

2019 was filled with copious amounts of travel, love, friends, tea, and dancing under the stars. Much of the music on this album was played loudly and often, gradually ripening along the way.

This year, with more time in the "studio" than usual, I've continued to confirm my suspicion that the creative horizon is an infinite regress, a moving target, stretching far into the distance no matter how long I stubbornly hike in its direction.

There is always more to learn,
more growing to do,
better music to make.

I am glad for this,
because if I one day reached music's edge,
I'm not sure I would know what to do.

These eleven tracks are just
a few of the fruits
of my recent labors of love.

My greatest wish for this music
is that, should you choose to listen,
these tunes may bring you
some glimmer of joy, or
some flame of inspiration, or
some moment of release, or
some feeling of relief,
or that they even may simply
contribute to some good memory,
as they already have for me
on numerous occasions.

I hope this music finds you
safe, well, and free.

And I look forward to the memories
we are yet to create together.

Steeper dreams have rarely been woken.

Source notes:
- The initial sketch of a beat was made quickly in South Station in Boston, in April 2019, at the crack of dawn, waiting to catch the train to Providence, trying to stay awake. Only trace quantities of this original audio remain in the final song, but the final song would have been different without the initial writing that happened around it.
- The first ambient pads to be added to this beat, which are in the final track, were created using AMBIENT-v4 by Audiobulb, which I bought and downloaded that same morning, over the WiFi in that same Boston train station, and quickly found to be a very useful tool for creating textures.
- Not long later, while hanging out in the studio with Greg (ILAS) in Providence, I turned a field recording of a hot tub motor into an atmospheric pad. A simple chord progression was made with this pad, set to the beat from the train station.
- Immediately following the addition of the hot tub chords, the progression was cemented by recording Greg on guitar and sequencing a simple bassline. The track was then tentatively titled Steepin, and was played out for the first time at the show the following night.
- After the show in Providence, that same week in April, I visited Brooklyn, NY, where I recorded Mat Muntz on the upright bass, and myself on a baby grand piano. Those recordings show up throughout this album, and on several other songs that are yet to be released. One of the tracks that I recorded piano parts for during that session was Steepin!
- On the full moon of May 2019, back home in Boulder, a seemingly unrelated song began. This track was made of a big stompin drum groove, a deep resonant bassline, an atmosphere infused with AMBIENT-v4 textures and 2CAudio Breeze2 reverb, some sliced and diced samples of my own voice, and some crunchy, sassy lead keyboard parts recorded with the Korg Monologue.
- Later in May, "Steepin" and "Full Moon 5-18-19" merged, and Steep Dreams was born.
- Craftal's circuit bent plastic butterfly wand can be heard at 2:00 & 2:54.

Source notes:
- At about the 16 second mark, if you listen closely at a high volume, you can hear bleed of the beat in my headphones from the piano recording. For some reason this makes me happy.
- The atmospheric textures in this track include field recordings of wind in Boston, noise from Back Bay Station (also in Boston), a sprinkling of birds recorded on Orcas Island, WA, and some textures from iZotope Iris2.

May there be funk in the garden of choices!

Source notes:
- This was one of the first tracks I started after Along the Arc was complete.
- Crunchy synth bass created with the potent combination of iZotope Iris2 and Trash2. Thanks iZotope!
- Krush (by Tritik) really came in handy for the EXTRA-crunchy bits, too.

Source notes:
- Mourning dove and other birds recorded in Boulder, Colorado.
- Extra layers of human calls, layered with the dove calls, courtesy of Shelby Bertsch.
- Eerie pad made from a fire alarm recorded in San Francisco (thanks, Oeksound Soothe!)
- This song began as a quirky sequence on the Korg Monologue in February 2019. That synth sequence isn't in the final track, even though it informed the groove of the whole piece, particularly the bassline.

Down at Panther Crick,
if you know where to look,
you just might find the secret waterfall.

Source notes:
- This track started while camping in Gifford Pinchot National Forest, WA. There was three minutes of space left on the SD card in my Tascam DR-40, and Joshua and I challenged ourselves to use that limited window of time to come up with the basis for a new track. Shortly thereafter, that series of short recordings was pieced together with my laptop plugged into the car speakers, while we drove through Oregon on the Erothyme Summer 2019 Pacific Northwest mini-tour.
- The waterfall audible around 3:07-3:48ish was recorded in Gifford Pinchot National Forest, WA.
- In the intro you can hear campfire crackles. The sound of the same campfire being put out with water appears 2:08-2:14ish.
- Joshua's lead vocals were recorded in a car, on the way to catch my flight home at the end of my Autumn 2019 tour, making this recording basically the last thing I did on the west coast before the pandemic.

While enjoying a pot of strong tea, it is advised that you keep your arms and legs inside the portal at all times!

Source notes:
- In February 2019 I was building a completely different song which included these percussion grooves from Kursten. At some point I solo'd the acoustic percussion group and realized that its groove could be taken in another direction. I saved a new version of the project, deleted everything but the hand drums, and started over from there - Strong Tea was born.
- Many of the strange chirps and bloops were created using free VSTs from xoxos including oscine tract, synger, and kl tract, all of which I downloaded more than a decade ago.
- The vocal samples that got sliced up for this track came from a collection I downloaded on Freesound in 2008. Thanks Katy, whoever you are!

inspiral:
(noun) The paths of a pair of binary stars or black holes that are spiraling in towards each other,
(adjective) describing such a path,
or (verb) to spiral inward.

"There is a world beyond ours, a world that is far away, nearby, and invisible..."
- Maria Sabina

Source notes:
- Initial snare drum made by hand drumming on a cluttered coffee table
- Singing bowl hits were recorded with a phone, sent to me as a text message, and re-recorded out of my phone speaker into a studio mic, then cleaned up in the demo version of Hit'n'Mix Infinity.
- Some of the grinding bass textures were created from a recording of a Theragun massage tool.
- The overtone vocals were originally recorded for a different track, before this one existed!

It's OK to be human.

Source notes:
- The clean version of the bassline was ripped from a track I made over a decade ago. That track wasn't very good, but this sample was the seed that Human Rising grew from. Save your work!
- One of the main drones, heard in the beginning and end of the song, was made with Malakai's Korg Minilogue in Brooklyn, NY.
- Other drones were made with the legendary Paul's Extreme Sound Stretch (aka Paulstretch).

Few things could be so clarifying,
so grounding, or so expansive,
as time spent appreciating
the vast looming mystery
of the stars with whom
we share this Cosmos.

Source notes:
- shimmery texture created by running one of ILAS's guitar parts from Steep Dreams through Audiobulb AMBIENT-v4.
- harmonic 7ths are awesome.
- this track was written in a different key and then slowed down.
- extended ambient outro made possible by Paulstretch.

THANK YOU
to Mom & Dad
to the Sun & stars
to the miraculous existence of ears
to the Great Purple One
to Mount Sanitas
to the hot tub
to the Moon
to Tea
to Kursten
to Sly JG
to Mat & Astrid
to Jessica Sirena
to Natalie
to Craftal
to Greg Visci
to Jessica Borth
to Phoenix & Zoe
to Aaron & Sophia
to Corey & Jeanine
to Adam Coleman
to Trevor Hostermann
to the Rainbow Downstem
to Nick Zuclich
to Jake Amason
to Jules & ABD
to Phil Diamont & Catalyst
to Casey & Resonance
to Nick Atlas
to Adam Liderman
to Paul Dearing
to David Blesse
to Patty B & LostinSound
to the Rust
to Joseph J & Art Era
to Magdelion & Shakti Sound
to Kyle & Drum Circle
to Setesh & Lost Valley
to CoSM
to OneDoorLand
to Bioloom
to Skytree
to Cat Phases
to Bee
to Norwegian Jo
to Glory Apple
to lil Krushie
to Devin K
to Sick Numbles
to Jackson
to Levi
to CJ
to Chad
to Malakai
to Lasagna
to Mushrooms
to Shelby
to the Autonym
to Dillard
to Becca
to OneDome
to Markus
to TonTon
to Dar
to Ra
to Sunshine
to Joseph B
to MC Tujay
to Matt M
to Jason S
to Kyle S
to Josh & Lindsay
to David Mahurin
to Be Wilson
to Keenan Terry
to Muhaimin Ahsan
to Jared Driscoll
to Andrew Ross Collins
to Yishai Reno
to Domas Lasauskas
to Raymond Giroux
to Brian Greeson
to Josh Meyer
to Mara
to Cole Freudenthal
to Tyler Blank
to Jazzyjaffa
to Robert Genega
to Nancy Shanteau
to Ren
to Herbie
to Miles
to Coltrane
to Ravi
to Victor W
to Bobby McF
to Billy P
to Keller
to Jamie W
to Evan B
to Maggie
to Ishq
to The Books
to Mas & Pepper
to Papa D
to Anthony
to Neely
to Huang
to Benn
to Bill
to Jakey C
to Dave
to Oska
to Roel
to RDJ
to Tom J
to Reid
to BoC
to Bach
to Escher
to Venosa
to Alex
to Alan
to Aldous
to Albert
to Alpert
to Ableton
to 2CAudio (Breeze2 is lush)
to iZotope (for RX Elements, Iris2, Trash2...)
to Oeksound (for soothe2 and spiff)
to Wavesfactory (for Trackspacer)
to xoxos (for clearsynth, kl tract, oscine tract, synger...)
to Audiobulb (for AMBIENT-v4)
to Hit'n'Mix (for Infinity)
to Tritik (for Krush)
to Paulstretch
to Freesound
to ASUS (for the Zenbook)
to Sennheiser (for the HD-25)
to Korg (for the Monologue)
to Tascam (for the DR-40)
to M-Audio (for the pair of Pulsars)
to Audio Technica (for the DR-VX2)
to Shure (for the SM57)
to Akai (for the EWI USB)
to Armstrong (for the clarinet)
to Nord (even though I ended up having to sell that thing)
to Focusrite (for the Scarlett)
to Steinberg (the UR22 makes a fine cowbell)
to Reid at Sweetwater
to everyone I forgot, which is almost everyone
to Music & all who listen deeply to it.